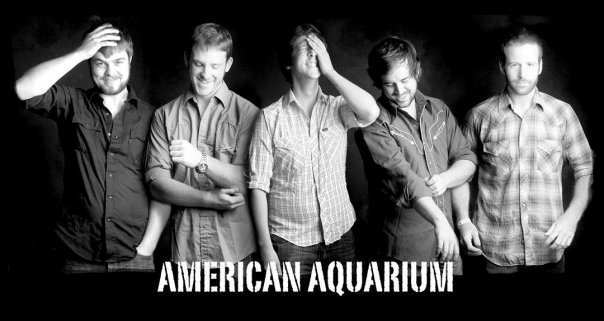 “ If you want songs about s**t not working out, we have seven albums on sale tonight “ announced BJ Barham, the lead singer and songwriter of the band from North Carolina half way through this show.

And he wasn’t joking. You don’t leave an American Aquarium concert humming a happy tune from a repertoire of fun, positive compositions…. maybe their music should come with the warning “ do not listen if you are in a fragile state of mind”? Fortunately for me and the majority of appreciative crowd at this lovely venue ( which I’ve praised in previous reviews ) we knew what to expect and I doubt any of us will be seeking therapy any time soon. It really was a great evening showcasing the best of BJ’s writing performed by superb musicians.

An early start meant a sparse audience for the support, East Nashville’s Tim Easton ( acoustic guitar/harmonica) and although his music wasn’t quite my style his accomplished playing was a pleasure to witness. Of his set the stand out song for me was one he told us was inspired by witnessing an argument at a bus stop, the woman repeatedly screaming out “ Don’t Lie” ……

By the time the five-piece American Aquarium took to the stage ( lead and bass guitars, drums, pedal steel/keyboard and BJ with his trusty red Gibson guitar complete with personalised strap) the venue had filled up nicely and
the plaintive pedal steel introduction to “ Man I’m Supposed To Be”, one of the band’s few out and out love songs got things underway

I was immediately of reminded me of BJ’s intensity while performing live which had made a lasting impression on me when I caught his solo acoustic tour last year. Almost scary in fact, but it’s just that he really does immerse himself in each and every meaningful lyric, emotions to the fore, with despair, bitterness and anger making regular appearances. Vocally I’d describe hime as a cross between Dylan and Sid Vicious….if you can get your head around that concept!

Warning us that the opening song was “ the happiest it would get all evening….it’s downhill from here, buckle up!” the pace picked up with “ Hurricane”, a personal favourite of mine, likening a relationship to the extreme weather feature ….. “ I can tell by the way the wind blows, she ain’t coming to make friends” …….” tell me baby was I a target, or was I simply in the way?”. But if you’re thinking by now that the rest of the evening was total doom and gloom, I can thankfully report that BJ is a really amusing story teller and in between songs there were many moments of light relief, he has a great sense of humour and shared stories from his past which were often the inspiration behind his writing. One such tale was about his mother’s side of the family (“ the wild side”) and his favourite uncle, Billy, who was always be particularly good fun and had a new girlfriend in tow every time they met… “ as a seven years old you don’t realise he had a problem” …. when his mother told BJ he was beginning to remind her of her brother it was a wake up call which helped him quit drinking ( he’s been sober for three years now) and led him to write the song “ Family Problems”. Then further on in the set he told how it still blows his parent’s mind that “ people pay money to hear about your problems” …..his brother has a “ proper” job, he sells used cars, working 9-5 with a regular pay cheque….but BJ has realised that for him, success is doing something that makes him happy and the resulting song “ Losing Side Of Twenty Five” was particularly well received by the audience

However, he admitted that his faith in the music business did waver a few years back and the band nearly folded, BJ had been homeless for three years and with the band playing 250-300 shows a year ( but often to practically no one!) he was about to throw in the towel. But, he told us, there were still a few songs lying around which a friend persuaded them to record, and thankfully they followed his advice as the result was their most successful album to date, “ Burn, Flicker, Die”, (described by Rolling Stone as being “ a pissed-off record about being broke and disillusioned “). Oh and by the way the friend was Jason Isbell who also produced the album.

Adding some variety, in addition to a great representation from the group’s back catalogue throughout the show, there were a few acoustic numbers from BJ ( “ I can only afford the band for half the set!”) which featured several tracks from his incredible solo album “ Rockingham” including maybe his most vitriolic performance of the night, “ The American Tobacco Company” about his grandfather, forced to work a dead end job in order to support his family after fighting for his country WW2 for the “ American dream” and who died a bitter man. And at one point fellow American, singer/songwriter Sam Lewis, who is also currently touring the UK, joined the band to share vocals on a cover of John Prine’s “ Spanish Pipedream” with the two singers laughing as BJ messed up the lyrics as apparently this was exactly what Sam had done when the two had performed the song together recently on a cruise ship!

However, for me and I guess the majority of the audience it was American Aquarium as an entity that was what the evening was about, all fantastic musicians seemingly loving what they were doing, even at the end of a lengthy European tour. BJ is the perfect charismatic frontman, his writing is sheer poetry, his delivery is straight from the heart. No, actually from the gut. Who needs a catchy chorus to hum on the way out? Definitely not me ( well, not all the time, anyway!).