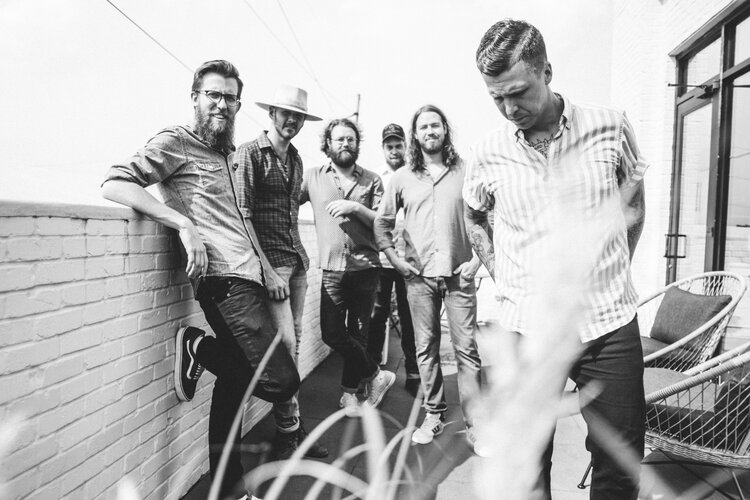 Inspired initially by a verse on a wall of an air bnb but ultimately by the book of the Bible of the same name, ” Lamentations” ( New West Records) is the first album from North Carolina’s American Aquarium with their newest line-up and it is fast becoming one of my favourite collection of songs from the pen of their incredible frontman and mainstay BJ Barham. Never someone who shies away from pouring his heart out, many of its tracks ( which deal with retrospective regret in various forms as the album title suggests) takes BJ’s writing to an entirely new level when it comes to digging deep and wearing his heart on his sleeve in my opinion. Whether it be those with politically framed commentaries about the state of the country he loves, often with specific reference to the farming community where he grew up such as the album opener ” Me + Mine ( Lamentations)” and ” Brightleaf + Burley” ( this title apparently a reference to a South Carolina tobacco company that went bust in the 60’s) or ones which are of a more introspective and personal nature like the gospel – tinged ” The Long Haul” which touches on his both his new found sobriety and his determination to keep making music ( something he also sings about in the Springsteen-eque ” The Luckier You Get”, one of the catchiest tracks ) he reveals not only his regrets but also what is truly important to him at the moment and in the future…..the album isn’t totally devoid of hope and optimism which could easily have been the case given its point of reference.

Produced by Shooter Jennings ( a last minute change after the original producer pulled to at the eleventh hour) the arrangements vary dramatically not only between songs but during some as well. The afore mentioned opening track is a great example of the latter, a ballad who’s accompaniment starts with delicate finger – picking on acoustic guitar but who’s amazing outro is a cacophony of sound which leaves the listener in no doubt as to the talents of band’s new members ……on a personal note, the piano and steel playing are particular standout features for me on many of the tracks.

And of course it wouldn’t be an American Aquarium album without BJ’s distinctive vocals, his delivery as intense as always is often harsh and acerbic but also demonstrates his more tender side at times, as in chorus of one of the more uplifting tracks ” Starts With You”. Lyrically he is up there with my favourite contemporary writers, and this album is no exception with some of his most though provoking writes yet. One of my favourite tracks for many reasons is the piano-led ballad ” The Day I Learned To Lie To You” , in the opening lines he explains how he had an ” honest plan to make myself an honest man ” but he slipped back into his old ways….. he uses a fabulous oak tree analogy as the song progresses to explain how his lies grew until ” a branch had snapped and then gave way and tumbled down and tore our home apart” . And in ” Six Years Come September”, a mid paced song overflowing with angst, the opening lines paint a picture which drew me in immediately. The story it tells unfolds with an unexpected and devastating twist, and the lines ” If I’d have done a better job of listening maybe you would still be mine” take on a whole new meaning.

But the entire album is one that you really need to sit down and immerse yourself in ( one of the benefits for artists releasing new music in this current lockdown situation is that a lot of people will have more time to do exactly that ) ….. I’m hearing something new with every listen which is always something I look for in an album and it’s one of the things that keeps drawing me back to this release.
Of course the major downside to lockdown is that tours are getting cancelled and/or postponed, and sadly that’s been the case with the first leg of the American Aquarium tour stateside but we need to saty hopeful that the remaining dates there, and the UK dates later this year, go ahead.
All details are at americanaquarium.com where you can also find some great ” Lamentations” merch!

Oh and congratulations to all involved as I’ve just seen that the album is currently sitting at no. 3 on the i-tunes Country Album Charts!

TC in Conversation with Kylie Morgan