Interview with Amanda Winter at The Studio in Nashville 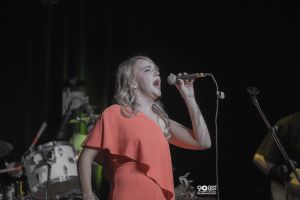 Amanda Winter celebrated the release of her EP, “Christmas Before You” with a show at The Studio in Nashville and I had a few minutes to chat with her while she got ready.  It was a great informal way to conduct an interview and I think we could have gone on a lot longer if time had allowed.

I did a little bit of quick research beforehand, learning that Amanda was a Nebraska native and had gone through the foster care system as a child.  The title track to her EP, “Christmas Before You” is one that she co-wrote with Mikalene Ipson about a foster child and a family that find each other and how all Christmases prior weren’t really like Christmas at all.  She’s done quite well for herself when so many that go through that system do not, and it’s a cause she holds very close to her heart.  I didn’t, however, want to dwell on that in the short time I had, as this was a celebration of her music and her favorite holiday, so I tried to focus on that.

Nothing makes an interview more interesting than an unusual setting.  Sometimes it’s a beautiful panoramic view of the city or a new coffee shop, or maybe it’s the restroom!  Hey, sometimes a girl has to get her hair done in privacy and time’s running short.  No worries!  I’ll just hang out and ask my questions while you get prettier.  Worked like a charm!  The music business.  It’s all glamorous, just like you’ve always believed it to be.  Note:  I promised to give credit to Amanda Winter’s stylist, Hannah Hudson, so here it is.  Kudos Hannah Hudson.  Her hair looked great. 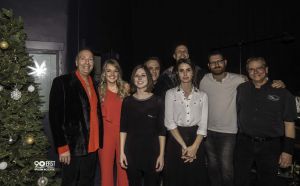 My first question, which was supposed to be my last, but due to the time crunch, I didn’t want to forget it, so I threw it at her right away, and like a boomerang, it came back to me so fast I almost got knocked out, was, “When you ‘Think Country’, what do you think?” “Reba!” Whoa! Then, “Reba’s the answer to everything.” Well, alrighty then!  I guess we had set the stage on where Amanda Winter’s feelings about country music and EVERYTHING lie.  Clearly, she was a Reba McEntire fan and it wasn’t the last time her name would come up in our seven minute interview.

I could have then asked who her influences were, but I like to mix the questions up a little to keep it interesting (not only that, but let’s face it, I think I was still recovering from that “faster than a speeding bullet Reba” to go there so soon), so I asked about her favorite Christmas albums, seeing as how she had just released her first Christmas EP.  It turns out Martina McBride and Lady Antebellum seem to be tied for Winter’s favorite Christmas records.

Grammy nominated Kent Wells produced “Christmas Before You” and when I asked Winter how it was to work with him she was excited to talk about him.  “Amazing.  I was so nervous at first, but he was so down to earth.  Just like a normal person.  The talent!  He brought all my ideas to life and the sound quality was great.  I couldn’t have asked for more.”

When asked if she’ll be doing any touring, she said she will be doing some Christmas is for Kids shows, going home to do some shows and then coming back to Nashville to start writing.  She was recently signed to BMI as a songwriter, so she’s excited about that.  She wrote two of the songs on her last EP and co-wrote the title track to “Christmas Before You”, so she’s had her feet wet in the writing department already, and now she’s ready to really get serious with it.

Asked if she had a dream co-writer, again, without any hesitation, she answered, “Mary Chapin Carpenter or Lori McKenna.” When asked why these two ladies in particular, she said  Mary Chapin Carpenter because not only does she love her as a singer, but she’s the reason she wanted to become a songwriter.  “I love the types of stories she tells, they’re different.”  With Lori McKenna?  “I love the story she tells about writing songs in her yoga pants on the couch with her kids.  I want that life.”

As for influences, her list is very short, but solid.  Reba, Mary Chapin Carpenter and Bonnie Raitt.  The only newer country artist that she can say she absolutely loves is Kelsea Ballerini.  She definitely identifies with more of the legendary artists.

Her dream venue?  The Grand Ole Opry.  I think that’s fairly standard for most country artists, but this artist is quick.  She’s either answered this question a thousand times before or thinks about it very often.  Her answers are so fast, I told her she should play Jeopardy!

We were now running short on time, but in a most unusual set of circumstances, I was running short of questions (I’m usually being given “the sign” aka “cut the interview now”) so we moved on to some random things.  I asked what living country artists she’d like to meet that she hasn’t yet.  She actually struggled a bit here. She said she’d met quite a few already, but then remembered she hadn’t yet met Martina McBride, and definitely George Strait.  So, Martina, George… if you’re reading this, there’s a young lady in Nashville that’s waiting to shake your hands.

What about those late great deceased artists?  If we had the power to bring them back for a day?  Winter quickly responded that she would love to meet Whitney Houston, even though she wasn’t country, “I miss her.”  For a country artist, she said she would choose Patsy Cline.

We talked briefly about “Nashvilleisms”.  The good and the bad.  I asked her to give me a couple of good ones.  She said coming from Nebraska, “Y’all” is a good one that they don’t understand back in Nebraska.  I told her I can relate, being a native New Yorker.  I enjoy “Y’all” too.  They don’t much get it in New York either. She also said she’s become a sweet tea addict.  Bad “Nashvilleism”?  One guess? “Traffic.”  That was the only one she could come up with, which spurred me to suggest she connect with the Nashville Chamber of Commerce.  Maybe they can work something out there.

Finally, I did make sure to ask Winter when she would make it over to the UK, as so many of our readers are from there.  Another lightning fast answer.  “Whenever y’all will have me!”

Follow Amanda Winter on amandawintermusic.com where you can also purchase her CD “Christmas Before Me” as well.