After over 30 years in the music industry Alison Krauss has become a household name along with her band ‘Union Station’. Three and a half years ago she began work on a new project and on February 17th 2017, Krauss was ready to release her first solo album in 18 years; Windy City; I am beyond thrilled that I got a chance to review it! 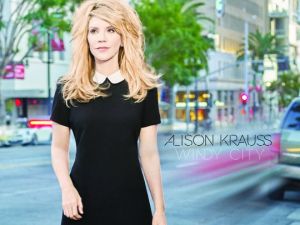 The album consists of 10 classic songs that Alison handpicked with her producer Buddy Cannon. The album, I feel, is very different to what you would usually expect to hear from this member of bluegrass royalty. With tracks from Brenda Lee, Eddy Arnold and Willie Nelson among others this album was really something special to listen to!

Windy City starts with ‘Losing You’, a Brenda Lee track originally released in 1963. This is not a track I was familiar with at first listen the song is reminiscent of a musical theatre number. Krauss’ vocals fir the track to perfection, her tone and control shine bright throughout the song. It is hard to believe that not too long ago she has been diagnosed with dysphonia, a condition affecting her voice, and had to cancel several shows she had with Union Station.

This is followed up with ‘It’s Goodbye And So Long To You’, released by The Osbourne Brothers and Mac Wiseman. This brings the album closer to the Alison that, I for one, am so used to hearing from her previous solo ventures. The song features a wind section as oppose to the strings I would expect to hear but that is certainly not a bad thing! This upbeat, old school, bluegrass tracks has you tapping along from the first note and is one of my favourites on the album. It is clear why this song was chosen to be one of the 10!

A second song from ‘The Osbourne Brothers’, and the title track of the record, is up next with ‘Windy City’. I must admit when I first heard the title of this new album, knowing it was a covers record, my first thought was that this would be a cover of the Doris Day hit from Calamity Jane! I was initially a little disappointed to realise it was not that track but that upset disappeared the second I started listening to the song! It is a beautifully written track about the heartache of the city holding the singers ‘baby’ and her beginning Chicago to ‘give him back’ or she will ‘lose her mind’. It talks about her love for this man even though he has travelled so far away and is caught up in this place. Alison Krauss sings the track with such conviction, you feel every little bit of hurt that the character within the song is singing and for me this is another stand out track.

A perfectly matched harmony brings us into the fourth track of the album; ‘I Never Cared For You’. It’s dark, with an element of Spanish guitar to give an old school western feel to the song. The song is of course a Willie Nelson track. A real cowboy song that adds a dramatic twist to the album from the songs we have heard so far. A welcome addition to this track listing. I feel so caught up with this album it is hard to believe that I am only 4 songs in so far.

‘River In The Rain’ by Roger Miller takes 5th place. I am being introduced to an incredible selection of songs as I listen through this album, it almost makes me ashamed I have not heard of many of these before this moment! Such amazingly crafted songs that have been produced to perfection and complimented so well with the effortless vocals of Krauss. It was never a question for me as to whether she would be able to do justice to these classic tracks but this really is something special. I feel like I am taking a real journey, not only through Country music, but through her mind and what rounded her as an artist.

The next song was co-written by her producer Buddy Cannon and released by Vern Gosdin back in 1981. This is followed up with Glen Campbell’s ‘Gentle On My Mind’. Such a fitting song to include on this album. With this country great battling his fight with Alzheimer’s, tributes have been pouring in from many of his fellow country artists and this thoughtful, beautiful rendition definitely sits toward to the top of that list. I am a huge fan of the original song and maybe that makes it harder when reviewing this as a cover but there is not a bad word to say about this!

‘All Alone Am I’ by Brenda Lee and ‘Poison Love’ by the father of Bluegrass, Bill Monroe bring the album up to a close. The songs show the vulnerable and upbeat side of Alison Krauss respectively. The final song on Windy City is ‘You Don’t Know Me’ by Eddy Arnold. Another perfect fit for this album. A song full of honesty and a melody that could only be found in a song of its era.

Overall I am beyond impressed with this new record. I just hope we don’t have to wait another 18 years to hear a solo project from Alison! I thoroughly enjoyed that the tracks are predominately backed with wind instruments and piano as oppose to the strings that her fans are so used to hearing from her. It is clear that her fiddle has taken a back seat to her just focusing on her vocals for this album and in this instant I don’t even miss it.

The record does not, in my opinion, lend itself to an Alison Krauss album you would expect to hear but sometimes the unexpected can take you on an even more incredible journey and this has not disappointed. I will have this on repeat for a while so I suggest you go and get your own copy of this…. I shall not be sharing!

Meet The Men of Midland