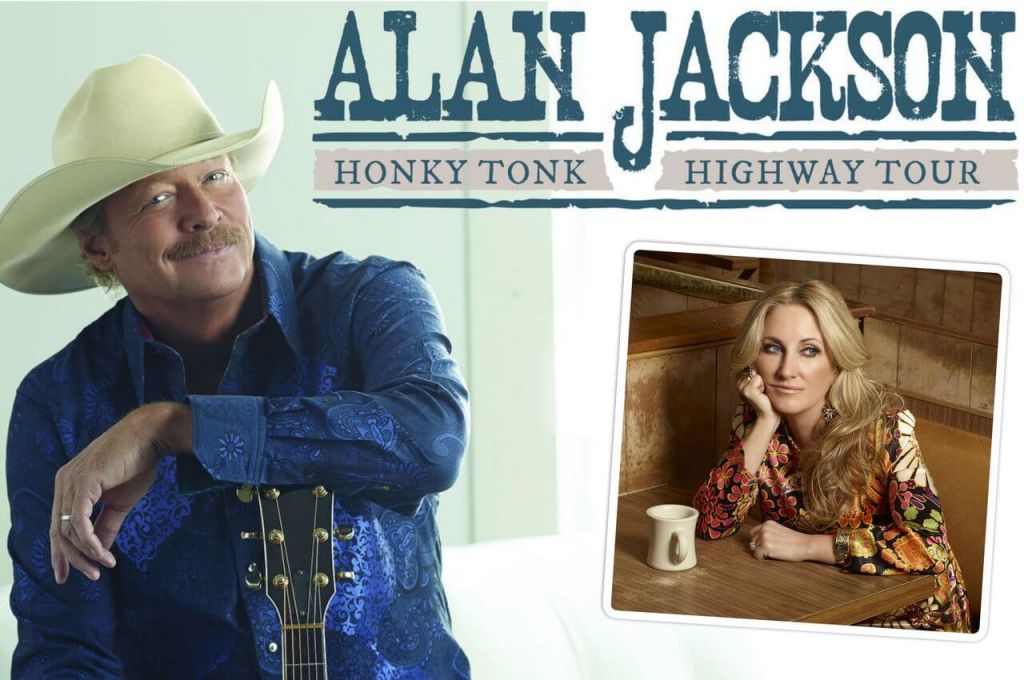 Alan Jackson. What can you say when it comes to a timeless singer like him? There’s really not much. He’s an artist that has to be experienced to understand the nostalgic emotion that he gives so many when you hear his music on the radio. Jackson made his way back into the Midwest to continue his much anticipated Honky Tonk Highway tour. After a stop in Green Bay, Wisconsin, he made his way over to the Target Center in Minneapolis, Minnesota. Postponed from a year ago due to weather in the surrounding areas the show was one all Jackson fans have been waiting for. With the arrival of the first snowfall Friday and blustery cold weather conditions just days before Halloween, hopes were high that mother nature would cool her tone (no pun intended) so that Jackson could make it for the show. Luckily, just a few snowflakes and cold weather is something Minnesotans are good at, and the show went on!

Opening up the show for the evening was another high hitter in country herself, Lee Ann Womack. Country music fans since the 90’s and before know what a timeless sound Womack carries with herself. Entering the country music scene in the late 1990’s and keeping that sound current into the early 2000’s, she’s still got a voice and sound that so many that yearn to hear real country music love. Due to in part, classic country is hard to find these days, but it has been almost two decades since the 90s have been around. Thankfully there’s music like Womack’s and Jackson’s to keep the sentimental country sound alive, even with the new music and sounds that flood the airwaves today. Womack just released a new album herself, The Lonely, The Lonesome, & The Gone and it was an immediate buy when I got to the merch stand. The most notable songs that she performed off her new album were, “All the Trouble”, and “Momma Lost Her Smile”.  As I listened to her sing recent tracks off her CD, I couldn’t help but wonder, “where has this lady been”? It feels as though she’s been under the radar for awhile now. That could be me, but I hadn’t heard much from her as of recently, so I was happily surprised to see she had released new music.  The Texas native created this album back in Houston at Sugar Hill Studios.  According to a radio interview the day of the show at local radio station, The Current, Womack explains she recorded the album in Texas to get away from the monotony that can sometimes come from recording album after album. “Nashville is a bit of a machine of sorts” she says in her interview. This recent release is proof to why it’s good to record in a different place from time to time. To complete her set, Womack threw in some of her originals that everyone was sure to know, with the goal of playing some “real country music” as she asked the crowd who was there to hear just that. “Never Again, Again”, “I’ll Think of Reason Later”, “I May Hate Myself In The Morning”, and “I Hope You Dance” are the songs that carried her fans through memory lane as most all in attendance joined in and reminisced with her as she sang the songs that are markedly, Lee Ann Womack.

Next up was the country music icon himself, Alan Jackson.  For an artist of his magnitude, he carries with himself on stage a modesty that most people without such accolades can’t begin to understand. He’s just a down home southern boy from Georgia that happens to sing country music for a living. Thankful for his fans who have allowed him to pursue this career choice and that have stuck with him through the years. Jackson has a no frills approach to how he approaches performing his own shows, and still, the crowd goes wild. I’m biased, because I was raised on Jackson’s music when I was just a young pup, and his music has stuck with me since then. Surviving the test of time, and the changes of what is and isn’t the most popular in music at the current time, there is something magical about what happens when Jackson takes the stage. It’s easy to say that artists “command a stage” by their performance and how they wrap people in, but in Jackson’s case, he commands it by simply just being. He paces the stage with guitar over shoulder, waving at the crowd. Acknowledging signs created by fans to grab his attention. All while seeming to recognize every fan in the room. Whether you are in the first row or the very last.

Jackson greeted the crowd by starting off his set with, “Gone Country” to which he immediately spun into, “Don’t Even Know Your Name”.  A small pause to greet the crowd and thank them for coming had us immediately spinning back into, “Living On Love”, “Good Time”, “Summer Time Blues”, and “Who’s Cheating Who”. After that whirlwind of hits, the stools came out and Jackson and his band, The Strayhorns, had a sit down for some stories and some slower ballads. On the heels of an induction into the Country Music Hall of Fame, Jackson told the story of his father winning a radio when he worked for the Pepsi-Cola company. That very radio would go on to inspire the opening line of his hit, “Neon Rainbow” and end up in the Country Music Hall of Fame. To which he then said a week ago Sunday night he too was added to the Country Music Hall of Fame. An immediate standing ovation showed the country man how loved he was, even all the way up in Minnesota. He expressed his thanks to the now standing, cheering crowd, adding, “I don’t wanna sound like I’m braggin’ I just wanna say thanks to people like y’all that made it happen”.  He shares being from Georgia he would have never believed there were so many country music fans all the way up here in Minnesota. He could have never imagined that people way up here would love country music, but “they’re everywhere. Out West Coast, Canada, everywhere.. I love it!”

He brought Womack back on the stage to sing a song they cut together, a Vern Gosdin hit, “Till the End”. Jackson then ventured into, “Wanted”, and “Someday”. The mood of the moment relaxed a bit although the crowd was still enthused with all the hits he was playing, he quipped, “I love the heartbreak songs. I really do.” The crowd cheered in agreement but he quickly turned the mood of the moment around by hopping into one of my favorites, “Pop A Top”. We were on our way to another Jackson medley of hits as they kept coming one after the other. “Country Boy”, “Drive” always dedicated to his Daddy Gene, “Little Bitty”, and then capping off the evening with, “Remember When”. Jackson’s reflection on the moments following the date that took the United States by storm following the attacks on 9/11.  It wouldn’t be a true concert if there wasn’t an encore, so one more song he did and it’s always a crowd pleaser when he does this one, “Where I Come From” as the screen behind him plays tribute not only to where he’s from, Nashville, TN but also the city he’s playing in that night. Images that reflected Minneapolis were flashed up on the screen periodically. The famous Spoonbridge and Cherry sculpture at a local art center. The logos for the Minnesota Golden Gophers (state college team), Timberwolves (NBA), Twins (MLB), and the Vikings (NFL). Among other various sites that make the city home.

It was a concert worth waiting for, but it always is when it comes to Alan Jackson. This show just proved that even more so. If I could have changed one thing about the show, I would have loved to hear him sing his newest release, “The Older I Get”. I’m sure logistically not every song that every fan loves can be fit into a schedule, especially with a repertoire such as his, but being it’s so fresh it would have been nice to have that one slipped in there.   If you haven’t been to an Alan Jackson show before, I’m left wondering why. If you can, and you are a lover of country music (which you probably are if you are reading this) get to one! You can have nosebleed seats and still feel like you’re in the front row. I’ve been to more than one Alan Jackson show and he’s yet to let me down, and although he has accomplished a ton in his lifetime already.. I don’t think that’s one thing he’ll be able to do.