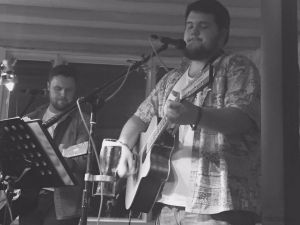 Alan is a very familiar sight on the UK Country scene, he is at as many gigs and festivals as he can, supporting the music he loves. I 1st met him at FSA Fest last year & then, as we live fairly close, I have seen him at several local gigs since. When he announced he was going to be playing his 1st gig I was made up for him. Originally I couldn’t make it, but then the date was changed and I could.

So, here I was, the Friday after Nashville Meets London weekend driving to Gosport. Now, don’t get me wrong, it isn’t far, but it isn’t generally a place you go to unless you have to!! My trusty sat nav got me there with time to spare, only trouble was, the pub didn’t have a car park, so I had to drive around for a bit to find a parking space.

I still had a good 10 minutes to spare when I arrived. Walked in & although there weren’t very many people there, there was definitely an air of excitement and expectation. There were people there from Crawley, Bracknell (Ok, they were on hollibobs and had come from Romsey, but they had still made an effort to get there) & then there was Natasha, who had taken not just 1, but TWO ferries to get to the gig – she lives on the Isle of Wight!! Dedication! First thing Alan did when I said hello, was to introduce me to his parents.

Bad Moon On The Rise was the next track, Alan then said “I said I would never sing a Johnny Cash song, but what the f***!” (Cannot believe he swore when his mother was sat 2 meters away!! Lol!!) He sang Ring of Fire, when he finished he said “Not that great”. Not that great compared to what? Not great compared to Johnny, but Alan did it justice I feel.

Are You With Me by Easton Corbin was next followed by 5 O’clock Some Where, again we had improvisation, instead of “What would Warren Buffet do”, we had “What would Lewis Rogers do?” Got a good cheer from the audience!

I should say at this point, on stage with Alan was Lewis Rogers who was on guitar & keyboard (not at the same time I hasten to add!!) and Andy Sammons, on loan for the night from Acoustic Journey. He was on his trusted Cajon drum, with his customary tambourine around his ankle – this man can multi task – girls can you believe it?? For the next track Lewis put his guitar down & moved to his keyboard Alan also put his guitar down, he asked how many people work a 9 – 5 job? Quite a few people I want to say cheered, but that isn’t right! Who on earth cheers working a 9 – 5 job? Obviously Dolly Parton’s 9 – 5 was next!

Alan then introduced Lewis and Andy for people who didn’t know them. Another Zac Brown Band track was next, Jump Right In. If you know Alan, you will know he LOVES Zac Brown Band so it isn’t really a surprise that this band features in his set heavily.

Alan again said the next track was one he was certain of because it was from such a strong artist, but he hadn’t done it before – Beers Ago by Toby Keith. We then had Blue Skies, followed by Beer With Jesus, during this track someone turned round and asked me who originally sang it, Thomas Rhett of course! After asking if we had any Kenny Rogers fans we had Gambler and then another Thomas Rhett number – Die A Happy Man.

Alan dedicated the next track, UB40’s Red Red Wine, to some friends who should have been there but weren’t as they had had a special delivery that day, a baby, although being a typical man Alan didn’t say whether it was a little girl or a little boy. Would have been one or the other I suppose! Now I have to say, I love this track, always have done, it is kind of a theme tune of mine! So I really enjoyed hearing it played live!

For the next track, Next To You, Next To Me – Rascal Flatts, Lewis took a seat & it was just Alan & Andy and Andy joined in with the vocals. Now I have seen Acoustic Journey several times (8 times in the last 12 months if anyone is counting!!) but you don’t really hear Andy as Jonsey & Ben are the main vocalists. I did a double take & actually had to stand up to check it was Andy, there wasn’t someone I hadn’t spotted on the stage. He was great!

Alan then introduced us to Ash Cooper’s tradition of Holler & Swaller. That went down really well! If you don’t know what this is, hang your head in shame, but I will explain. You yell as loud as you can YEEHAH & then you take a big old swallow of your drink!! Alan then sang Chris Stapleton’s Whiskey & You on his own. I always get really nervous when people cover this song. Having seen Chris be reduced to tears by the reaction of the audience at C2C this year, I always think it is a very mighty song to sing. Alan did it well, I needn’t have worried! Several of us had our phones in the air!

At the end of this number the couple who were sitting at the same table as me leant forward & the guy said to me “You know this guy singing don’t you?” I said “Alan, yes”. Turns out, they had popped in for a pint, seen there was going to be a singer so decided to hang around. She likes Country music, him not so much, but they both thought Alan was great & they stuck around right until the end! I was so pleased for Alan! I had just assumed they were friends or regulars, but they didn’t know him or anyone else in the pub. This is what it is all about!

When You Say Nothing At All finished the 1st half. I was impressed. I wasn’t really sure what to expect, but both Alan and Lewis were great (Sammons always is!! Lol!!) During the break I introduced Alan to the couple on my table, his new fans!

After a short break, the 2nd half of the set started with Wagon Wheel (Darius) and Stuck in Colder Weather (Zac Brown Band.) During this track I am sure what is every guitarists nightmare happened, a string broke on Alan’s guitar, he joked that it was his G string, don’t know if it was or not, but it was funny. Alan also said “That is why I always bring more than 1 guitar.” I have seen a few strings break & again I am always so impressed that the artist looks surprised but carries on as if it hadn’t happened. I have seen Marc Almond storm off the stage & have to be coaxed back on because he had feedback on his microphone for about 2 seconds!!

As a kind of thank you, Acoustic Journey’s Get Back Up was next, it was good, but Jonsey has gravel in his voice that can never be matched! For Sweet Home Alabama all three guys were up front singing, Alan said it was Hanson Do Wop style!! If you didn’t know, you wouldn’t realise that these 3 guys do not usually play together all the time, they were seamless and fun!

Cruise (Florida Georgia Line) was dedicated to Lewis’ brother Greg. Then a song that practically has me sobbing everytime I hear it, Bittersweet, Zac Brown Band.

To bring the mood back up we had Summer of ’69. For his last number a guy in the bar, who I can only assume is a regular and knows Alan, lent him his 12 string guitar. I have never even heard of these before (oh, I have so much to learn!!) let alone seen 1. Alan was quite taken aback that he had been lent it! The old favourite sing along Country Roads was Alan’s last song. Everyone was singing along & swaying.

When he finished the Landlord shouted Encore Encore. The rest of the pub responded enthusiastically, we all wanted more. Sammons said, “Not me, I want to watch this last bit.” So it was just Alan & Lewis. American Pie was the encore, but the Landlord wasn’t happy. “Nope, 1 more for the road”. Alan finished with Love Angel, he had to look the words up on his phone to sing it, but Lewis quite happily played keys along.

As I said when I went along to this gig, I went to support a friend, I wasn’t sure what to expect, but I can admit I wasn’t expecting a night as good as I got. I thoroughly enjoyed the whole night. Full credit to Andy, who stepped in & played the Cajon drum as if he always plays with Alan. Lewis swapped from guitar to keys & back again effortlessly, but I take my hat off to Alan. He was professional, confident and obviously enjoyed every moment. Alan told me he has never had the confidence to perform previously, but after FSA Fest in July, he got talking to several of the guys who did perform & they gave him the confidence to believe in himself & to believe he can do it. Darcy Crawford in particular has said he will help Alan & Alan told me there is already new music in the pipeline. Hopefully another UK Artist to watch for. Go Alan!!