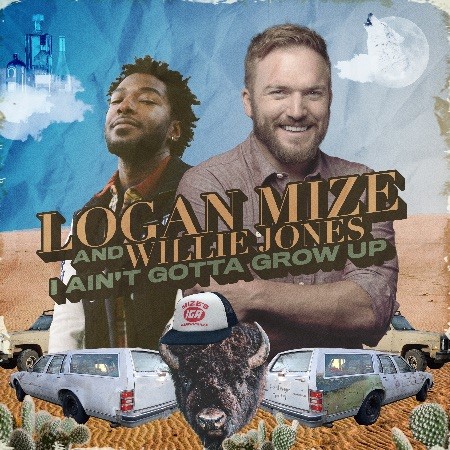 Mize and Jones have amassed a loyal following and will deliver a dynamic show to fans along the West Coast on Mize’s “I Ain’t Gotta Grow Up Tour,” which kicks off on Friday 31st January  in Colorado Springs, CO. Full info and tickets HERE.

Hailing from Shreveport, Louisiana, halfway between Dallas and New Orleans, Willie Jones’ early musical interests spanned everything: from gospel, pop and R&B to the country and hip-hop vibes he embraces within his own music. He wanted to become a country singer since the age of 14, when he won a school talent show by covering Josh Turner’s ‘Why Don’t We Just Dance’.

Possessing a gift for melody together with an authentic country voice are the cornerstones of his talents, but his lyrics speak to an audience who wouldn’t normally gravitate towards the genre. It’s there in the first line of ‘Runs In Our Blood’: “Me and my fam go ham, go hard in the paint.” That’s true of his other early key tracks, ‘Down For It’ and the hedonistic “good-ass time” of ‘Bachelorettes on Broadway’.

Following the success of his appearances at Country Music Week (where we got to hang out with him, which you can check out HERE) and on tour with Michael Ray in the UK with Michael Ray, Jones is set to entertain even more fans in the UK come March when he has been confirmed as an artist for the after show party and also the Spotlight stage at this years C2C: Country to Country.

New studio album ‘Kingdom In My Mind’ from The Wood B...