UK fans will be among the first to hear Julia Cole’s brand new single: ‘Be Where We Are’, thanks to a special early release on October 28th 2019 and a world exclusive first play from Baylen Leonard on Country Hits Radio. The official worldwide release is November 1st (pre-save / pre-add here) with the release of an additional single, ‘Call It’. The sneak preview celebrates her return to the UK & Europe later in November with the James Barker Band (dates below), as well as a one-off full band headline show at the Buck ‘n’ Bull Saloon – limited tickets remaining.

With the release of her debut single ‘Trust You’ which has had well over one million streams to date, Cole has proven herself to be one of Nashville’s brightest new talents, capturing the attention of fans across the world and sharing stages with the likes of Dan + Shay, The Chainsmokers, Jon Pardi, Carrie Underwood, Kane Brown, Chris Lane and many more; and these two new songs are set to show another side of her music and build on that success. 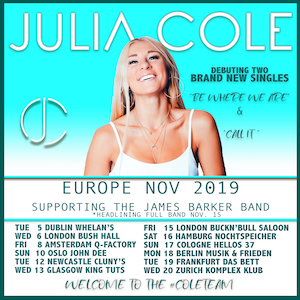 ABOUT JULIA COLE:
When Nashville recording-artist Julia Cole isn’t catching rays on a beach somewhere, she’s most likely in the studio creating her unique blend of R&B & Country music, heavily influenced by her Houston, Texas roots.  Julia’s debut single ‘Trust You’, has well over one million streams making coveted playlists like Spotify’s “Breakout Country”, “Wild Country” and “New Boots.” Apple Music’s “Breaking Country”, “Cool Country” and “A-List Country,” as well as Radio Disney Country. In the UK, Country Hits Radio’s Baylen Leonard named Julia a “Country Champion” and added ‘Trust You’ to their playlist, and back in the US, Country Music Television recently selected Julia as their CMT “NEXT Artist Discovery” and is supporting ‘Trust You’, Julia’s most recent music video across National TV.

As a volleyball player and past marathon runner, Julia brings her love for music and sport together by advocating for women’s athletics via a movement called @WomenSportsSocial. You can catch Julia performing for many NFL, MLB, MLS, NASA, SEC, NCAA, and NASCAR, and ESPN/ ESPNW events. Fans and friends are considered extended family and forever part of the #ColeTeam. Two new singles, “Be Where We Are” and “Call It” release worldwide on Nov. 1st 2019, and Julia’s music can be found on all streaming platforms and social media: @JuliaColeMusic (Instagram / Facebook / Twitter).