After joining Keith Urban for back to back performances during his Vegas residency tour this past weekend, it was just announced today that Ingrid Andress will be joining Tim McGraw for his massive Here On Earth stadium tour. Produced by Live Nation, the tour kicks off July 10th in New York and will continue to make stops across the country before wrapping up in Chicago on September 26th. Fans can first purchase tickets beginning January 24th for select cities as part of Live Nation’s Country Megaticket at www.Megaticket.com with additional ticket on sale dates beginning in February (check local listings). 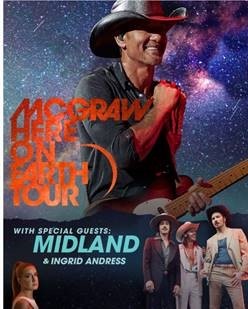 As one of Us Weekly’s “10 Best Songs of 2019”  Andress’ debut single “More Hearts Than Mine” was the year’s only debut from a solo-female to crack the Country Airplay Top 20 and is currently nearing Top 10. It also earned the Billboard December Chartbreaker her first entry on their all-genre Hot 100 chart, with NPR including the poignant ballad as one of “50 notable songs released in 2019.” Named an Artist to Watch by several esteemed outlets including The Tennessean, Andress was also nominated to Country Radio Broadcasters’ elite New Faces of Country Music Class of 2020. The annual showcase takes place during the Country Radio Seminar in Nashville this February, with past honorees ranging from contemporary artists like Taylor Swift and Maren Morris to legendary icons like George Strait and Reba.

The Warner Music Nashville/Atlantic Records breakout is set to join label-mates Dan + Shay for their massive North American arena tour this spring, beginning with back-to-back nights at Nashville’s Bridgestone Arena in March With a career-total of 115 million global streams to date already, she has accumulated over 700 THOUSAND track equivalents in the U.S. from songs all released in 2019. Currently gracing the cover of MusicRow Magazine’s Dec/Jan issue, the Next Big Thing Class of 2020 honoree will join Urban again on February 10th for his All for the Hall benefit concert in Nashville alongside superstars Blake Shelton, Chris Stapleton, Tanya Tucker and more.

“A country pop rookie who can write a chorus like Sia,” (PAPER), Ingrid Andress is chipping away at expectations of herself and her sound with her debut single “More Hearts Than Mine” currently Top 15 at country radio and climbing. She has performed on NBC’s TODAY and Late Night with Seth Meyers and was praised by HITS magazine for her “honesty and vulnerability virtually absent on Country radio.” Featured in ELLE’s 2019 Women in Music issue, Andress has also received overwhelming critical acclaim from outlets such as People, Rolling Stone, Us Weekly, NPR, Variety, Vulture and The Tennessean to name a few. The accomplished singer/songwriter, who has penned songs for artists including Bebe Rexha, Charli XCX, FLETCHER and Dove Cameron, continues to hone her skills writing with heavy hitters in the music community like Sam Hunt, Alicia Keys and Tori Kelly.

The Highway Women celebrate all forms of beauty with new single &...