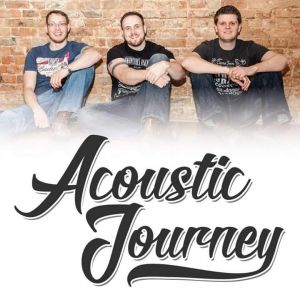 Acoustic Journey, all 29 and based around Oxford, met between school and college. They began as Andrew and Ben, on the open mic scene in their home town; picking their band name on the hoof by amalgamating Jones and Gurney into Journey and tagging Acoustic on the front. Later joined by Andy Sammons, who swapped his heavy metal playing drum kit for a Cajon; a box shaped percussion instrument. They have now, with a vision of moving the band forward, added their friend James/Jaime on bass. Having successfully released 2 EP’s; Get Back Up; Get Back On It and Real Good Feel Good, they spoke about their plans for the band in the coming months and next year.

So your officially now a four piece rather than your original tag line of ‘3 Voices, 2 Guitars and a Cajon’ (which I did not pronounce right!) ?

(Jonesy) Oh yeah, we’ll need to change that now to add bass!
The plan was after this summer, we were hoping for bigger slots at the festivals next summer, across the UK and wherever else we end up next year. We just want to expand and develop the sound as is; with the 2 acoustics, Cajon, bass and maybe bring in some more. We’ve got feelers out at the minute for a few lead instruments like a fiddle or a banjo and we know a friend of ours who wants to play keys; Lewis Rogers!

Wow, your really playing with your sound moving forward then?

(Jonesy) Definitely, its just an evolution really! We’ve done what we can with our 3 piece, 2 EP’s which have done really well, but its sometimes difficult to write new songs and feel the bigger sound when your only doing it with 3 instruments. Getting the bass in there makes such a difference in the sound of our songs and going forward it’s a positive move I think.

Whilst writing your new material, I’m guessing bass and other instruments are in mind then?

(Ben) Yeah we’ve got a few songs we’re putting together at the moment. We thought about doing an album but to be honest it takes to long to get out so we’d prefer to release another EP. The sound we’re going for is a much fuller sound and we’ve got a producer in Nashville that’s going to help us with that.

I guess with an EP there’s more of a hope of having it mixed and released in time for the festivals next year?

(Jonesy) We’ve all got full time jobs to do as well as finding time to get together, write and learn new songs; before we can actually put them together and release them, so it is quite difficult. 5 or 6 songs; whichever we decide to put out, is not our maximum quota! We’ve got loads of songs that are just sat on the backburner waiting for a bit of a change of angle. We have got enough material together to make an album, it’s just we want to make sure its good and not just an album full of fillers. We’re quite selective with what we write and what we bring out.

(Sammons) It’s taken us a while to get the last one ready because we wanted it to be spot on! There is so much in the pipeline, things we might potentially rework as well. Our EP’s been out almost a year now, so potentially to do an album of 10 or 12 tracks, how long would that take? We’re perfectionists, we’d take like 20 years over it!

Will you be trying any of your new material out during the Winter Tour you’ve got coming up?

(Jonesy) We’ve got a list of 4 or 5 tracks that we put out some feelers on the other day. Big City Lights I think will be the next one to make an appearance because that one is nearly ready. It’s a bit like County Line in some respects, we’re not known for our slower songs and for that reason they tend to make a bigger impact. County Lines has had a really good reception since we released the video and I think Big City Lights will be another one that will hopefully make people go wow.

(Sammons) Everyone expects the more kind of upbeat stuff from us but I’ve spoken to a lot of people about County Line and most have said its their favourite from the EP.

(Ben) We still like to write quite optimistic songs and that’s deliberate, we try not to write too many sad songs.

(Jonesy) Of the 4 new tracks, 2 started in my notebook and 2 started in Bens and we bring them together to band practice. We wouldn’t rule out working with co-writes but the way it works at the moment, either I bring a song or Ben brings a song and then we ‘Acoustic Journey-fy’ it and then we start playing it live.

(Ben) I think with Country music you need to be quite flexible with your format depending on what your needed for. So I think we are going to be looking at quite a number of different formats for the band, from the acoustic set up, all the way up to full band and in between. I’d imagine 3 or 4 potential line-ups or setups because the events vary so greatly from an open mic night all the way up to Buckle & Boots!

Quoted by John Roffey in Maverick magazine as “Exceptional Country Rock” and having received numerous nominations for awards; including UK Country Radio Group of the Year this year and the upcoming BCMA nomination for Horizon Act of the Year, these guys really are a band to watch out for!

Ain’t Quite A Truck, having only heard it once, already is quite likely going to be one of my favourite songs next year and I cant wait to hear the new EP’s sound with the additional instruments, band members and a Nashville producer behind it. The momentum these guys are riding at the moment, between always keeping in touch with their loyal fan base, receiving well deserved nominations and relentless gig schedules, they really do deserve all the best for their vision moving into next year. ( Lee )