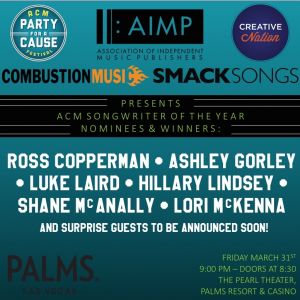 The magic of Music Row came to Las Vegas on March 31st at the ACM Party For A Cause: Songwriter Showcase. Presented by the Association of Independent Music Publishers, Combustion, Creative Nation and SMACKSongs, The Pearl Theater at Palms Casino transformed into a raw and intimate Nashville listening room far from the Las Vegas glitter and noise; a haven where country music fans could hear familiar songs from the radio live and acoustic just as they were the day they were written.

Storme Warren welcomed the crowds to the inaugural ACM Songwriter’s Showcase with praises of the “Nashville Songwriter”; the minds behind the magic. The audience was ready to see the familiar names in their favorite album liner notes come alive before their eyes. 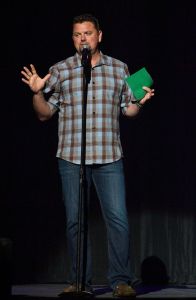 For the first writer’s round, Matthew Ramsey and Trevor Rosen of Old Dominion and Josh Osbourne joined host Shane McAnally onstage in classic Nashville round fashion. Kicking off the show with McAnally’s Kenny Chesney cut “American Kids,” all four of the writers strummed their guitars and harmonized with each other like brothers. From the first song, I knew that the Music Row songwriter Brotherhood was going to alive and well that evening. 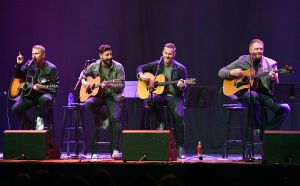 Old Dominion took the audience on a stroll down their “less-than-glamourous” memory lane. They reminisced about days of traveling in mini-vans and playing company picnics. It was in those days they got the idea for the next song they played; their 2015 breakout hit “Break Up With Him.” From the first lyric of “Got a girl from the south side, Got braids in her hair…” the crowd roared for Shane McAnally and Josh Osborne’s “Body Like A Backroad” co-written with Sam Hunt and Zach Crowell.

After the audience’s sing-a-long, McAnally welcomed Brandy Clark to the stage. Clark’s raw performance of “Three Kids No Husband” silenced all 2,500 seats in the theater. After telling her story, Clark walked offstage as she always does; graceful leaving the eloquence of her song in the air. 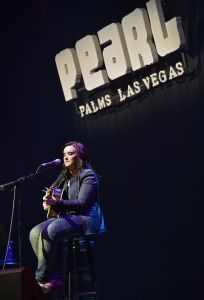 Before the awards, I had recently fallen in love with Dripping Springs, Texas trio Midland. To my excitement, Shane McAnally and Josh Osborne kicked off their Midland cut “Drinkin’ Problem.” The song, steeped in Dwight Yoakam undertones, felt so familiar and yet so fresh.

The writers took a moment to illustrate how a song could take on a life of its own. The 2016 hit “I Met A Girl” written by Sam Hunt, Trevor Rosen, and Shane McAnally had a pop cadence in the writer’s room when it was written. However, once recorded by William Michael Morgan, the song emerged on the record as a sweeping country ballad with the production of Jimmy Ritchey and Scott Hendricks. The writers sang “I Met A Girl” in the style of Morgan. Another testament to the power of “the song.” Another Sam Hunt sing-a-long ensued with Matthew Ramsey and Josh Osborne’s co-written song with Sam Hunt “Make You Miss Me.”

As the round came to a close, McAnally invited “a friend to the stage”; Miranda Lambert. Dressed in fringe, Miranda swayed onstage and with just a strum of a chord, began to sing “sting of a needle droppin’ on a vinyl….”. At that moment, Miranda Lambert, Josh Osborne, and Shane McAnally brought together two worlds; the singer and the writer. 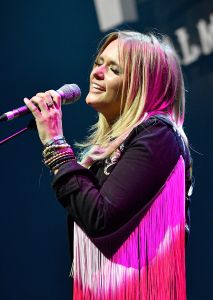 The room was mesmerized as round one came to a close, and round two began. Matthew Jenkins, Hillary Lindsey, and Ashley Gorley took us on a spin through the radio dial with their songs that were currently impacting radio. Dierks Bentley took to the stage to sing his newest single “Black” he had co-written with Ashley Gorley and Ross Copperman (who was still to come in the next round). 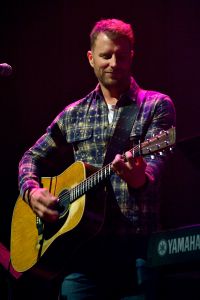 Hillary Lindsey sang of infidelity and a load of wash in her current radio cut with Carrie Underwood “Dirty Laundry” co-written with Zach Crowell and Ashley Gorley. Instantly, the women in the audience were eager to join in singing about a cheating man and a bottle of Ajax.

As the crowd settled, Ashley Gorley introduced a hero of his to the stage; Dean Dillon. Dean took his engraved guitar in his hands as the writers onstage looked upon him in admiration. As I listened to Dillon croon his masterpiece “Tennessee Whiskey,” I knew I had seen that guitar before. His daughter, Song Dillon, and I had co-written together on Halloween night, and in his hands was the guitar she was using that night. Met with thunderous applause, he walked off the stage with his iconic mystique and mastery.

The writer’s sat for a moment as they let Dillon’s performance sink in. After collecting themselves, Matt Jenkins began to tell the familiar story of a guy falling in love while headed to jail before he kicked off his Keith Urban cut “Cop Car” co-written with Zach Crowell and Sam Hunt. Another Keith Urban cut was started by Hillary Lindsey. Bringing her own soul to her co-written radio cut, Hillary sang “Blue Ain’t Your Color,” a preview of the Urban performance that was to come awards night.

Ashley Gorley left the crowd sentimental as he rounded out the set with his 2007 Trace Adkins treasure, “You’re Gonna Miss This.”

The final group of writers to fill up the line of microphones and guitars consisted of Ross Copperman, Lori Mckenna, and Luke Laird. Laird opened with his current Luke Bryan cut, “Fast.” The song’s struggle about the inability to “slow down the passage of time” was present because I didn’t want the night to end. Lori McKenna called Hillary Lindsey back to the stage to share about the origins of their 2016 critically acclaimed song “Girl Crush.” Lori McKenna shared how one day, herself, Hillary Lindsey, and Liz Rose were gathered together in the kitchen. They were faced with the decision “should we talk about our husbands or should we write a song.” Needless to say, they decided to write a song that day, and the rest is history

Ross Copperman brought “Setting The Night On Fire” to the table; his Chesney cut co-written with Matt Jenkins and Josh Osborne. I was anxious to see Ross Copperman for the first time. I had been a fan of his work, but never had the opportunity to hear him in person. I was not disappointed.

The writers turned to the wings and introduced another face to the audience; Luke Dick. He walked onstage and sat his stool with a coolness that swept anticipation through the crowd. Luke Dick told the story of how he had an idea… “Kill One Word’.” He said he didn’t know what the word was, “and then I just changed ‘One’ to ‘a Word,’ and it opened up.” He brought the idea to Jeff Hyde at a writing appointment, and after working on the song for about 20 minutes, Hyde had the second verse completed. Church came into another session with Dick and Hyde with the bridge. Just like that, “Kill A Word” was created. No further introduction was needed as Luke Dick began to strum his guitar like a marching soldier. When he opened his mouth, I could tell he and his co-writers Jeff Hyde and Eric Church, were kindred spirits.

Ross Copperman got another sing-along going with “John Cougar, John Deere, John 3:16” co-written with Shane McAnally, and Josh Osborne. Copperman’s performance was just as fun and infectious as Urban’s was on-radio.

Then came the moment I had been waiting for all night. Lori McKenna began her last turn in the round with a story. From her seat, McKenna shared that “she dropped her kids off at school and stared out the window for 7 hours writing in yoga pants”. She spoke of her children and the things she would want them to know if she and her husband could not be there for them “This was written as a list with three chords.” As silence fell over the Pearl, McKenna began the first verse to “Humble and Kind.” I don’t think there will ever be a day that song does not move me.

Luke Laird took his final turn with his own rendition of “Give Me Back My Hometown” to a chorus of claps from the audience. After he had strummed the final chord, he looked to his left and welcomed CAM onstage. Dressed in her signature yellow, she brought a brightness to the stage while singing a song she introduced as “a song about regret”. Her “Burning House” hypnotized the theater until she invited the audience to hug one another and sing the chorus that we all knew so well. I grabbed my mom and a stranger and swayed back and forth singing happily.

As the last notes rang out, she stood up and announced that it was her honor to announce Lori McKenna as the ACM Songwriter of the Year for 2017. CAM adorably made a muscle with her arm saying “fem-in-isim!” Lori McKenna singer-songwriter is now the first woman to win the honor in the 52-year history of the ACM Awards.
There was a glow about the lobby as the audience filed out of the theater. The camaraderie among songwriters, Nashville’s foundation, was alive and thriving. I walked away from the show thankful to have heard the stories that had been locked away in the writer’s rooms. 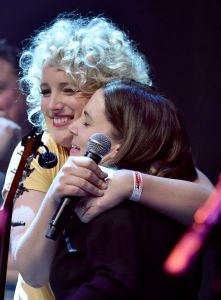 I believe the night can best be summarized in this short conversation at the BNA baggage claim. My plane from Vegas landed in Nashville at midnight. Myself and some familiar faces from the awards show stage crawled our way to baggage claim. Personally, I believe there is good tired and bad tired in life. Bad tired is where you are exhausting your resources as a human and pouring yourself out to the wrong priorities. Good tired is being tired because you’re giving everything you’ve got to something you love. I believe all of us writers and artists who walked through the empty airport were “good tired.” As a turned with my bag to walk to my car, I saw Shane McAnally wheeling his bag out as well. I turned to him, exhausted, and said “ that songwriters show was really something special,” to which he replied, “it really was.”

Tags ACM Party For A Cause: Songwriter Showcase

IS IT THE ERA OF ERIC VAN HOUTEN?