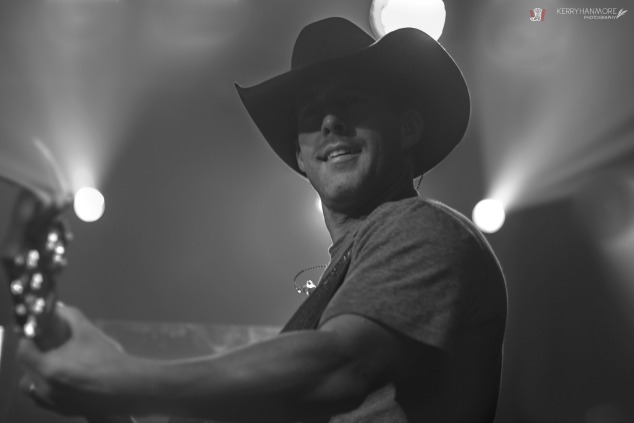 This is one night I’d been looking forward to for a long time. I’d missed Aaron Watson on his last tour of the UK with Sam Outlaw after the release of ‘The Underdog’, the first ever independent album which debuted at number one on the Billboard Country Chart. Mine and my friends’ excitement was palpable as we entered the venue ready for what we already knew was going to be a fabulous night of more traditional Country music, rather than the rock/pop variations which are a constant on most mainstream American country radio stations.

There were two surprises that greeted me on entering the venue. One was the smell of paint due to the current renovations and the other was a cold breeze that made me thankful I’d left my leather jacket on rather than check it into the cloakroom. Maybe I’m just impatient but if there’s one thing I hate more at a concert, its queuing to get your coat back at the end of the night! I’d rather attempt to wrap it round my waist and look uncool as, who cares? I’m there for the music anyway. Another drink, a few more bodies and a move down the front eliminated the cold as the room heated up with anticipation. It’s an iconic music venue which invokes a real sense of intimacy although the capacity holds as many as 600.

Honey Ryder had started their set when we arrived. I think singer, Lindsay O’Mahoney, has got great stage presence and a superb voice which really grabs your attention. My first introduction to them was at the C2C Launch party where I thought they put on a great show and they don’t disappoint tonight. Solid tunes, polished delivery and to top it all, they look good on stage. Great opening slot for them and I’m looking forward to seeing more of them in 2017. 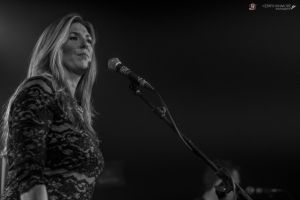 More beer, banter and catching up with friends old and new until the strains of Johnny Cash is pumped out from the speakers. People start cheering and I hear a lad shout out in excitement, “there he is!” and everyone starts waving at Aaron who is standing at the side of the stage.

He comes on to ‘Freight Train’ and the whole room erupts into cheers and whoops and we’re off….rolling into Honky Tonkin’ ‘Real Good Time’ complete with his incredible band and exceptional fiddle player. ‘Summertime Girl’ follows and there is a sea of heads at the front just bopping up and down as they start to let themselves go. There is a great deal of male camaraderie taking place down the front as Aaron fist pumps with a few fans and states how ‘great it is to be back in London’ and declares that he’ll be back again before long to much cheering from the crowd. A quick mike adjustment – “I might be 5ft 10’ but with my boots and my hat on I’m 6ft 2’, come on!” – Yup Aaron, I totally agree with that sentiment, check ME out at C2C, ha-ha, the image in my head is how I think I look, ok? Just go with me here (insert smiley face!).

He thanks everyone for coming out and supporting his brand of country music, again to much cheering and even blows a kiss to a bearded guy in the front row! He has a great sense of humour and connection with his fans. He tells a story about his dad being 100% disabled after serving his country in the Vietnam War and spending a lot of time at the Veteran’s hospital in Amarillo, Texas, volunteering with his daddy and his life being shaped by this. He wrote a song called ‘Raise Your Bottle’ for his dad and this story leads nicely into the song. It’s great to see so many people raising their glasses/bottles during the chorus, a mixture of respect and just because.

Chants of ‘Aaron, Aaron’ begin as soon as the song has finished and a respectful Aaron comments that he’s right here, he’s going nowhere and he’s just got started. That’s just what we all want to hear and brilliant timing for his next track ‘That’s Why God Loves Cowboys’. This is such a feel-good song and just makes me grin all the way through – only disturbed once by my friend, Mary, declaring her love for his lead guitarist. Girls, I know, sorry….

Aaron has been suffering from a cold and sore throat for the last few days so a few comedy moments while he applies some mouth spray and then we’re onto the next story about writing a love song for his wife. He speaks in great detail about being grumpy and a turd (his words, not mine!) and how his wife is an angel. He sang this song to her at the Grand Ole Opry (huge cheers from the crowd) and offers to sing it to the man in the front row with a ‘really nice beard’ to much hilarity. Cue the more mainstream, country radio friendly ‘That Look’ followed by his new single “Outta Style” from the new album which is a perfect, upbeat, singalong friendly tune.

He asks for the house lights to go up so he can see the text message he’s just received from ‘momma’. He takes a few photos so he can send them to her ‘to show he looks like a superstar” hashtag #WhostheDaddy but then quips he’d better leave that bit off! He shows his versatile side by moving from comedy moments to sad stories without dampening the atmosphere of the night. He is a class entertainer who has such appreciation for his fans enabling him to carry on earning his living as a singer/songwriter.

He tells us another story of losing his daughter, Julia Grace and how he lost his lustre for performing and struggled getting up on stage. His remedy was provided by Elsie Frost, mother of Lane Frost the famous, world champion bull rider who died at the Cheyenne Frontier Rodeo. She helped Aaron lift the burden from his heart by telling him that Lane’s greatest achievement wasn’t the fame but accepting Jesus as his saviour and this, in turn, lifted Aaron’s burden. Now, there was a lot of noise coming from the audience at this point, talking over his story, possibly as a number of people don’t care for that reason but this is the very heart of American country music talking, the essence of a culture that most English people wouldn’t relate to and why Country failed to make a significant mark in English culture in past years. Aaron is a real cowboy with real values and faith and I’m quite happy to quote Brad Paisley’s “This is Country Music and we do”. Amen to that. Aaron introduced ‘July in Cheyenne’ and told us to excuse him as he was a little hoarse – I had a real chuckle at that as I wasn’t sure he even noticed that pun!

After getting his microphone changed as ‘it smelt of fish & chips’ he got the crowd worked up for a great live rendition of ‘Wildfire’ which led into…another story! This time about teaching his boys to play the guitar the Outlaw way with Willie, Merle & The Beatles and his daughter asking for cash and a Taylor Swift guitar and songbook for Christmas! He agreed to teach her to play as long as she locked the bedroom door so his wife couldn’t put anything on social media! He apologises to the bearded man in the front row for letting him down for playing ‘We are never, ever, ever, ever getting back together’ but it’s all good as his daughter has promised to learn some Loretta & Dolly in return – what a great dad! He reminds us his new album is out soon and that he’s written every one of the 16 tracks by himself and none of them sound like Taylor Swift, praise the Lord! I feel the burden lifting too…. 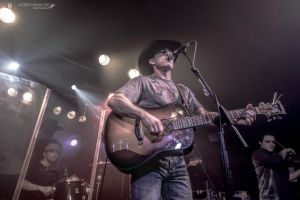 After an upbeat rendition of ‘Getaway Truck’, Aaron hands out water to dehydrated fans in the front row before playing ‘Bluebonnets (Julia’s song)’. This is a really heart wrenching song and did not receive the level of respect I think it deserves due to the incredibly noisy crowd at the back of the room. I’m all for having a great time with your friends and I wasn’t dumb myself throughout the concert but I found this quite disrespectful. However, it was beautifully delivered and led into another thank you for his fans for enabling him to achieve the level of success he has by their support. This flows perfectly into a story about the anti-establishment song ‘Fence Post’. The line ‘I’d rather be an old fence post in Texas, than the King of Tennessee’ says it all.

The traditional ‘The Honky Tonk Kid’ is a real treat and the band is introduced to an appreciative crowd. They are all fantastic musicians but the fiddler is exceptional and I was transported straight to a Nashville Honky Tonk. A girl from the audience got up and held the bow whilst the fiddle player carried on playing before holding the fiddle behind him still playing! Reminded me of a country version of Slash from Guns ‘n’ Roses when he used to hold the guitar behind his back and over his head while still playing. Seriously, brilliant musicianship. A mellow moment with ‘Barbed Wire Halo’ follows next and a random comedy Scottish language lesson! Another great new song ‘They Don’t Make Them Like They Used To’ alluding to the madness and fighting currently taking over the USA. Then ‘Reckless’ and its goodnight London. Or rather, goodnight after he has stayed for at least another hour or so, meeting fans and posing for endless photos and signings. By the way Mr Watson, I am the fan who tweeted you who nearly missed her train and I will definitely be seeing you at the next gig!

Aaron Watson’s quest to put the cowboy back into country started with a bang and is gathering momentum with every new album and show. He is true to his traditional roots and the values he holds close to his heart – faith, family and fans – is the crux of who he is as a genuine all round nice guy and artist. As a lapsed Catholic, I even considered going back to church. Problem is we don’t do Cowboy Church like they do in America….

Vaquero is released on February 24th.

The Bluebird Cafe @ Country to Country