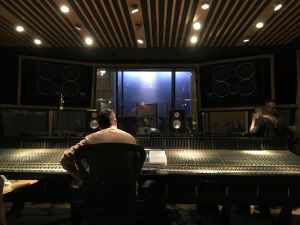 On Saturday night in West London at the world famous Metropolis Studios, A Thousand Horses took a break from their live shows to record a live set for vinyl. They didn’t want to be there alone though and so a handful of guests were invited along to watch the session!

When recording for vinyl the session must be tracked via analogue on a tape; like the old days! The engineer is able to go back to mix and master the tracks but you can’t re-record over the tape! You are also limited to time as just like an old school cassette it won’t play forever before you need to flip it and listen to side B. So the band chose their tracks carefully and with a short break mid recording to flip the tape this was their set:

Side B
One Man Army
Bridges
First Time 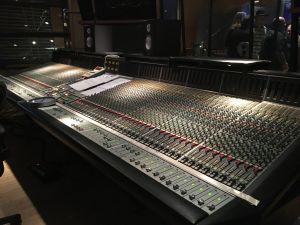 To create a true sounding vinyl it takes a lot of musicianship and the artist and their band have to be incredibly tight because you only get one go around and recording this way isn’t cheap!

The band kicked off and it was interesting to see them in a studio environment. Away from the cheers and screams from audience members and the atmosphere created on a stage under those lights; yet something familiar remained. They still gave a performance. Just because they were in the studio it didn’t stop A Thousand Horses and their supporting band from putting on one hell of a show. The professionalism from all the members shone through during the session and the effort from everyone in every note that was played and sung was incredible.

They also took the time after the session to meet each guest one at a time, take photos and sign.

I can’t wait to hear the finished product of this vinyl and I for one will be be buying this on release!