Nashville artist Olivia Lane, who has just announced her first UK shows, including a London headline date at The Slaughtered Lamb on 6th Feb 2019, presented by Belles & Gals Tickets – more dates to follow. 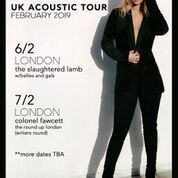 Having amassed nearly 20 million streams for her music to date, and named one of Rolling Stone’s “Country Artists You Need To Know”, as well as being tipped as a rising star by the likes of Entertainment Weekly and iHeart Radio; Lane’s latest single ‘You Got Me’ is already proving to be her most successful track so far.

Olivia Lane is dynamic, smart, funny and above all, an entertainer. Much of her confidence is rooted in her Texas upbringing. Her mother was a local Texas country singer that inspired her to sing and start writing songs at age 16. Olivia ultimately landed in Nashville, where her self-titled debut EP stirred interest beyond Music Row in 2016.

Olivia bids influence to Linda Ronstadt and Carole King with the production and energy of Shania Twain. “If I have to categorise myself I’d have to say I’m pop country. Growing up I was a musical melting pot, but country music always had the lyrics that drew me in.” Most recently, Lane has been writing and recording new music with plans to release one song at a time directly to her fans, which Lane did with her last release of ‘Devil and You’ and is continuing to do with ‘You Got Me.’

A Voice You Need to Hear – Mark Bray