It’s no secret that country radio station The Big 98 in Nashville is a huge supporter of St. Jude Childrens Research Hospital, and when they throw a fundraising event, they go all out.  Such was the case at this year’s Guitar-B-Que.  Realizing that they needed to stretch their legs a bit, the event was moved to Ascend Amphitheater, and the space it provided was a great relief to those who attended last year’s show at Losers in Midtown, which was rather cramped, to say the least. 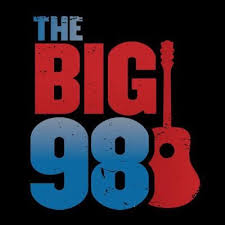 Mother Nature almost cooperated too.  She kept the rain at bay, but she certainly turned on the heat and humidity.  Concert goers and performers alike were pouring sweat, but the mood remained upbeat despite all that perspiration.

Things kicked off with Brandy Clark, the native of Washington State who has rocked the country music world with her brilliant songwriting and performances.  Bringing her own brand of rebel sass, she played songs from her new album, “Big Day in a Small Town”, including the title track, “Girl Next Door” and “Broke”.  A cover of John Mellencamp’s “Small Town” was also on her set list and she did it justice. 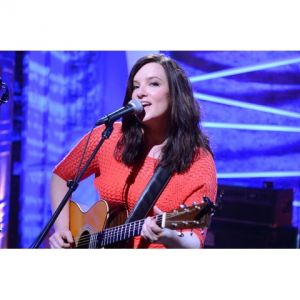 The evening’s emcee, The Big 98’s much loved disc jockey, Amy Paige, a champion for St. Jude, kept everyone entertained between acts.  One would never know it, but Paige confessed she has a terrible case of stage fright.  There were no outward signs of that affliction, and she kept things flowing smoothly.

Next up was relative newcomer, Chris Lane.  Lane brought such intensity to his performance, it could be argued that he deserved to be the headliner.  His single, “Fix” currently sits at country music’s number one position in the nation.  Backed up by an incredible band, Lane is one to keep your eye on.  In addition to songs from his own album, Lane played a power packed megamix of songs from The Weeknd, NSYNC and Silento.  The crowd was dancing, the ladies were swooning and that, my friends, is how you become a big star.

Bobby Bones, morning disc jockey at The Big 98, not only has one of the country’s best radio shows, he also heads a band.  A band that includes Producer Eddie, The Raging Idiots began by playing silly covers, and has since grown to proportions never expected.  Lindsay Ell, who could easily be in the running for best female guitarist in country music today, is often on board to help out, and she was totally on point for Guitar-B-Que this year.  With Ell on lead vocals, The Raging Idiots pumped out a very cool version of Stevie Wonder’s “Superstition”.  Also along for the ride was Natalie Stovall, the brilliant fiddle playing head of the band, Natalie Stovall and The Drive.  With Stovall on fiddle and Bones on guitar, the band whipped up a rollicking cover of Charlie Daniels’s “The Devil Went Down to Georgia”.  The audience was also treated to a fun cover of “Peaches” by The Presidents of the United States of America, and a heavy, but not-to-heavy, and extremely cool version of Prince’s “Purple Rain”, with Trainer (yes, he really is a personal trainer) Ahmad on vocals. 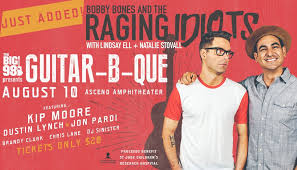 Jon Pardi, in his traditional cowboy hat, came out swinging with one incredible band.  Kicking off his set with the hit, “Missing You Crazy”, he followed it up with one dedicated to all the night shift workers, appropriately titled, “Night Shift”.  His new album, “California  Sunrise” is destined to be his best so far, and he treated the crowd to a few tracks from it, including “Out of Style”, a little number about songwriting in Nashville.

In addition to Amy Paige, Big 98 afternoon disc jockeys, Tige and Daniel handled some of the “between sets business” and DJ Sinister kept the crowd singing and dancing to remixes of songs such as Mark Ronson’s “Uptown Funk”.

Dustin Lynch, in the second-to-last position in the line up, all but destroyed it.  Dressed to thrill in his usual cowboy hat and a black Guns ‘N Roses t-shirt, he started off with “To the Sky”, a song penned by superstar songwriter Ashley Gorley.  Lynch’s hit, “Cowboys and Angels” had the crowd on their feet, singing along, as Lynch thanked them for “changing our lives” by supporting it.  “Seein’ Red”, currently in heavy rotation on country radio, scored a knockout with the audience.  Lynch’s band, one of the most solid I’ve seen lately, really knows how to amp things up, and on this number, they let loose.

The evening’s headliner, Kip Moore, also delivered.  Bringing it on heavy right from the start with “Wild Ones”,  the title track off his latest album.  Moore is credited as a cowriter on the song, as well as every song on the record.  “Lipstick”, another cut off the album had fans swaying and singing along.  By this point in the night, many of the audience members had easily had their fill of Budweiser products, and the hit “Beer Money” certainly resonated!  Moore provided a perfect ending to an event that is as important as it is fun.

The Big 98 deserves so much praise for all it does for the children at St. Jude.  St. Jude never accepts payment for treatment.  The focus is on getting children well and saving lives.  Fundraisers keep the wheels turning at this world class facility in Memphis, Tennessee.  Finding entertaining ways to raise money for St. Jude is something the amazing people at WSIX, The Big 98, do exceedingly well.  Events like Guitar-B-Que are vital.  Keep your eye on The Big 98’s website (thebig98.iheart.com) and your ear on them at WSIX 97.9 FM in Nashville and on iheart.com nationwide.