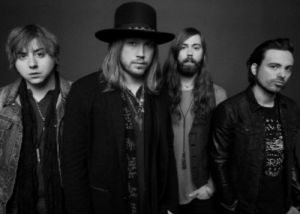 Southern rockers A Thousand Horses are returning to the UK for a handful of shows this November/December, including a very special ‘Live Cut To Vinyl’ event at the legendary Metropolis studios on December 3rd.

The band will be recording six tracks live straight onto vinyl, which will include a mixture from their critically acclaimed album Southernality as well as brand new music. Fans will be in for a chance to come and watch their performance at this remarkable event. Keep an eye on the band’s social media pages for more details.

Their UK headline tour sees them play London’s 02 Islington Academy on November 30th followed by a show in Manchester, which due to overwhelming demand will now be at Manchester Club Academy. Joining them will be Essex four-piece Purson as main support on both dates. The band will also be making an appearance at this year’s sold-out rock ‘n’ roll weekender Planet Rockstock.

Recently the band released the video for ‘Travelin’ Man’ which is the latest single to be taken from the debut album. It follows the previous single and title-track ‘Southernality’ which secured a place on Planet Rock’s A-List along with the earlier tracks ‘First Time’ and ‘Smoke’, which were also added to the C-List at BBC Radio 2.

The band have been nominated for ‘Best New Band’ at this year’s Classic Rock Awards and were also nominated for the Academy of Country Music Award for ‘New Vocal Duo or Group Of The Year’ and were hotly tipped by Rolling Stone Country and USA Today for ‘Smoke’, with its video – which now has over 16.5 million views – also receiving a nomination at the CMT Music Awards.

First storming onto the UK music scene at this year’s C2C festival at the 02, A Thousand Horses have firmly cemented themselves as a phenomenal nine-piece live outfit and a must see band for 2016.