“The Truth and the Lie” Review 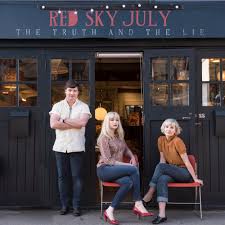 Anyone who is familiar with this trio of writers/musicians will no doubt already appreciate Shelly and Charity’s trademark harmonies, Ally’s impressive guitar solos ( alongside Charity’s rhythm guitar/fiddle playing and Shelly on electric mandolin) and all three’s accomplished, well-crafted songwriting.

They are very much down to earth people, preferring to stay true to themselves, unwilling to compromise their musical integrity or bow to pressure from the music industry to fit into a mould ( big respect!) and they straddle a variety of musical genres including folk, country, americana and pop, drawing on influences from equally varied artists. Maybe the inability to pigeon hole them helps explain why they remain relatively unknown outside their loyal fan base despite playing numerous headline gigs and high profile support slots, and their last album, Shadowbirds, receiving much critical acclaim from the industry, including a lot of love from the likes of Bob Harris and Ricky Ross.

Perhaps this is about to change with the release recently of their third album which, as they promised, has a much bigger ( more radio friendly ?) sound than their previous offerings. Like with the afore-mentioned Shadowbirds the band chose to run a ” Pledge Music” campaign with this album, not so much for funding but in order to be in direct contact with their followers and offer them “exclusives”….. the band have a close rapport with their fans and never take them for granted which is evident at their headline shows where they always thank the audience for coming out to see them and spending their hard-earned money on tickets.

“The Truth and the Lie” debuted at number 3 in the UK ‘s Official Country Artists Album Chart, brilliant news and pay back for the trio’s hard work……..it is released on their own record label, recorded at their own studio with Shelly producing, all the tracks were written by the band ( with the incredible Beth Nielsen – Chapman co-writing on three of them )……. impressive to say the least! Joined by some fantastic session musicians Mark Neary, Ross Hamilton and Dave Etheridge on pedal steel, bass, drums, wurlizer electric piano and percussion to help achieve the expansive sound they were after, for me there was always the risk that this would detract from, or even alter, the band’s core sound but the production is perfect and I was pleased to find that these additions really do enhance in many respects. The same can be said about Beth Nielsen-Chapman’s vocals on the song ” Strathconan”, her rich lower range adding depth to the harmonies especially evident in the acapella ending.

Of the ten tracks, there is a good mix of tempos, from beautiful ballads such as “In Black” ( the only solo write on the album, written by Shelly about her husband Ally’s now well-documented brain aneurysm but looked at from a new perspective ) and the dreamy album closer “Sway” , inspired i believe by husband and wife Shelly and Ally dancing together at a BBQ, to the more upbeat numbers such as “Walking Country Song” ( a fun and clever song about how to split your music collection in the case of a relationship break up, one of the more commercial numbers for sure with its infectious chorus ) and “Jet Trails” which opens the album with it’s infectious, pop-like sound.

As always, the songs take inspiration from the band’s life experiences and observations, but to my mind there are more positive messages on this album than on its two predecessors……….maybe a reflection on where the bands’ heads are right now? For example, although they speak of problems and troubles and criticise the music industry on the opening track ( ” Your song’s too strange for Nashville, and your face is not a ten”) they shirk them off as being temporary ( ” one minute there, next minute gone “) like the Jet Trails in the title. And in the break up song ” Taking Myself Back” the message is not about the sorrow of the split but the joy of leaving a controlling relationship and reclaiming what was sacrificed on a personal level (” I wasn’t born to be your puppet on a string”) .

Not to say there isn’t any prevailing darkness ( it wouldn’t be a Red Sky July album without this!) ……..the title track is one example, about the complex feelings aroused when falling for a good friend, trying to deny what is happening whilst being unable to at the same time. This one really grew on me, I think it is more of a slow-burner than some of the other songs that are immediate ear-worms but i love it more with every listen, lyrically it is one of my favourites. “Strathconan” is another heart wrencher, a woman re -visiting the same place every Summer as her lover promised to return there one day …………she relives her memories of their times there together and refuses to give up hope that they will be reunited, there will never be anyone else for her. The picture they manage to paint with their lyrics is fantastic, one of the things I love about their writing. And of course, the afore-mentioned ” In Black” is hardly a happy-clappy song……the melancholic introduction setting the tone, desperation in the vocals and lyrics such as ” please say I could be what you want, and i can make you smile” . One of my favourites from an instrumentation point of view. Talking of which, those who are Ally fans listen out in particular for his guitar solos on ” Dodge” ( another positive song about moving on ” I want to go dancing, not just talk about it” , “I want a clean slate, fresh air, destination anywhere”) ” Walking Country Song” and ” Strathconan” but as always his playing is just wonderful throughout.

It is hard for me to pick a favourite track, it changes with every listen, but one that is always there or thereabouts is ” Long Time Dead” which really should be everyone’s life mantra, such an uplifting anthemic message and a contender for one of my funeral songs ( yeah, I do like forward planning!) .
Red Sky July admit it’s hard to recreate the album’s sound with just the three of them, but having heard several of the tracks played live acoustically last year I can vouch for the fact that they still sound fantastic in stripped-back form, so if you like what you hear on this CD look out for the band’s festival dates this Summer, plus I gather there is a headline tour taking shape with dates to be announced in the near future.
As always, Think Country will keep you informed and of course you can follow the band on the usual social media sites and at redskyjuly.com