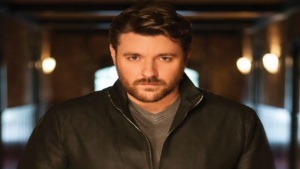 American country singer Chris Young released his fifth studio album back in November 2015 titled ‘I’m Comin’ Over’. The album, which has been nominated for Album Of The Year at this Years Academy Of Country Music awards, consists of eleven tracks and currently, has two songs released as singles including the title track ‘I’m Comin’ Over’ and ‘Think Of You’ (Duet with Cassadee Pope).

The first track on the album, ‘Heartbeat’, conveys such enthusiasm towards the meaning of this song; Young describes it ‘Love is that perfect kinda crazy’ in his ‘Stories behind the songs’ accompanying album. The song creates a feel good vibe throughout and is a real sing-a-long, whilst the mimic of heartbeat at the end of the song is a clever accompaniment.

The title track of the album ‘I’m Comin’ Over’ is one of my absolute favorites on the record. Released in May of 2015, this single has this year has been certified ‘Platinum’ by RIAA https://www.riaa.com/gold-platinum/?tab_active=default-award&ar=CHRIS+YOUNG&ti=I%27M+COMIN%27+OVER . Something Young is undoubtedly good at contributing to, as he has co-written most of the songs on the album, is a catchy chorus that draws you in and leaves you with it running over and over in your head – with this song I really do not mind that at all!

Next up, ‘Think of You’, features something quite refreshing for a Chris Young album: a female contribution. Speaking again on his, ‘Stories behind the songs’, Young himself admits that never before on any of his albums has he done a true duet, as in male and female vocal leads. Cassadee Pope is a welcome addition to the record, her vocals compliment Young’s perfectly and create a strong melodic journey throughout. ‘I Know A Guy’ is slightly slower in tempo and in mood, it enables Young to use his powerful, deep iconic voice – a really enjoyable listen and a good placing in the album sequence.

I personally believe every country album needs a summer feel good song and ‘Sunshine Overtime’ certainly fits the bill. With lyrics including… ‘Checking on out of that nine to five’… ‘Flip flops and tank tops, and tan lines’ and ‘Jump in the water, go weekend wild’ its easy to imagine yourself doing all of the fun things above and the track is a really enjoyable and welcomed addition to the album.

Underdogs has a whole different feel to it, a punchy guitar riff and what sounds like a vocal effect on Young’s voice, it has guitar solo’s throughout and lends rock influence to it, again something that is new and changes the feel of the album.

Fresh from the critical success of Young’s last album A.M, which is personally one of my favorite albums, I wondered how this new album would go and if there would be anything he could change or improve on. I am a big fan of his voice, it remains comforting and unique and in all I have been very impressed with ‘I’m Comin’ Over’ as a complete work. It has delivered everything I hoped, and whilst many country artists have recently released experimental albums that have strayed from their traditional material, Young has not been tempted to do so. This element of familiarity allows interest to be retained throughout listening for Chris Young fans, whereas the tempo and melodies have enough change to create an impact on new and old listener that will make them want to listen again and again. This album receives a thumbs up from me!