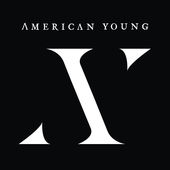 Having released a self-titled EP in 2014, Jon Stone and Kristy Osmunson, better known as American Young, released their debut album though Curb Records. Many of the songs which made the cut have been available on Spotify for some time now, so fans will already be familiar with most of the songs. It is however nice to see them brought together, to make up what is a stunning album from start to finish.

Opening track ‘Be Here’ is a ballad that has traces of their debut single, ‘Love Is War’. This sweet song is an invitation to shut off the outside world and live in the moment. Jon and Kristy’s vocals blend together so effortlessly, which is apparent from the first minute of the track.

‘American Dream’ takes a look into an idyllic lifestyle, where “there ain’t no Monday morning rush” and “the only time clocks are the ones we wind” With pretty lyrics combined with the presence of a fiddle, this one will be played over and over.

Jon and Kristy had a hand in writing the material for the record, with the exception of ‘Love Is War’ – although the way in which they convey the lyrics would have you believe otherwise. It was the debut single from these guys (the radio edit features on the album, and differs slightly from the EP version) and I’ll never tire of hearing it.

The catchy ‘Point Of View’ provides a tongue in cheek look at relationships. Despite the banter it has a beautiful sentiment, and is the only track on the record written solely by Jon and Kristy, making it that little bit more special. At only two minutes and thirty five seconds long ‘Party In The Dark’ is the shortest track. Despite this, the quality isn’t any different to what we’ve heard beforehand though.

The same goes for ‘Better On You’. The latter marks the half-way point of the album. Both songs share a pop orientated sound, proving the duo have a chance at mainstream success, should they choose to go down that route. Featuring fellow country star Lee Brice, ‘Eighteen’ is quite a simple track, lyrically it’s about wanting to out and enjoy yourself, and will remind anybody listening of the days before they had to pay bills etc. It’s probably the weakest of bunch, that said, it’s not unlistenable. The hauntingly beautiful ‘God Sends A Train’ was featured on the EP, and with Kristy singing solo on the verses, it gives her a chance to shine. Jon’s vocals compliment her on the chorus, and with his rocky edge it adds a little dynamic too.

“Sometimes God sends a whisper, carried in the rain, when we don’t want to listen“ is my favourite lyric from the record. The mellow sounding ’Slow Ride’ contains some beautiful harmonies as does proceeding track ‘Soldier’s Wife (Don’t Want You To Go’. Both of which tell beautiful stories, the latter a heartbreaking tale of a soldier’s wife not wanting her husband to go off and fight in a war. That being said I think the opening lyric ”I don’t want to think about having today goodbye” can resonate with anyone having to say goodbye to a lover, no matter what the circumstances are. Musically I love the way this builds up strength throughout, starting out with mainly piano and drums leading to something a little more rocky towards the end.

Any girl that hails from a small-town will relate to the penultimate song ‘Hometown Girl’, whilst closing track, ’Something To You’ tugs at heartstrings in a traditional country sounding way. The album ends on a high and it’s certainly left me wanting more.

This is by far, my favourite country album released this year. It’s clear that both Jon and Kristy have a lot of talent. I can’t wait to see how their career goes from here onwards, but I predict we’ll be hearing a lot more from American Young in the future.