Nashville, the capitol of Tennessee, aptly nicknamed Music City, USA and host to the popular television show by the same name- you’d think people coming to visit would expect nothing less than to hear music. Dating back as early as 1950 when a radio broadcaster first called it Music City, Nashville has been home and host to countless talented artists spanning multiple genres. The city itself hosts a vibe other cities can’t even touch. Between Lower Broadway and Midtown, and many surrounding areas, this city boosts numerous live music venues. To music lovers, this city is a dreamland of opportunities- history has proven as much.While with any growth comes some expected changes, older buildings are torn down to improve the city, up come condos and residential towers to host the new growth population to the area.

Now being a Native Floridian, I am well aware of what we in Orlando are known for- Disney World. I live about 25 minutes from Disney, and while I can hear a faint noise, friends of mine live so close to the back gate of Magic Kingdom that it sounds like bombs going off every night around 10pm when the Firework production is in procession. No one can complain- they knew when they moved there Disney was there and everyone who decided to move so close to an amusement park would have to deal with the noises incurred by the park.

So wouldn’t you imagine if you moved to a Downtown area of Nashville that you would expect to hear music events amongst the other noises that fill the downtown areas of any large city? Well for some, complaining is the answer, just in the last few days it has been splashed on social media that Soulshine Pizza Company and other surrounding venues hosting live music follow a city noise ordinance. Has anyone heard such ridiculousness? Where has society come to when people start trying to change a city that’s very foundation is music? These venues have been known to take their events well into the night, I would imagine when searching for a home you’d do your research before picking up the keys to your new abode before assuming the area would be quiet at a certain time of night. 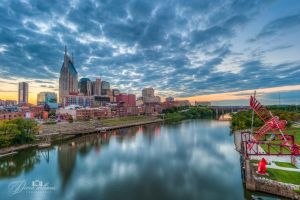 Well Red Roots LLC agrees and has started a petition to at the least amend the current noise ordinance in order to combat these venues from having to cease live music on their porches. If you feel as passionate as we do about keep MUSIC in Nashville then click HERE.

Would someone move to New Orleans and expect the jazz bands to keep it down or to New York, the city that never sleeps, and expect them to change? Nashvillians and those passionate to stand in unison with their brothers and sisters in that city need to speak up to have their voices heard!

The Bluebird Cafe @ Country to Country