Tuesday afternoon, an overcast sky and I found myself walking up to Cain Production Studios to Meghan Linsey‘s album release party. Guests were welcomed by Linsey’s lovely mother as they stepped into the studio waiting to hear what The Voice runner up had delivered in her new project. The intimate group mingled and shortly gathered round as Linsey took the stage with Tyler Cain to showcase a few songs off the new album. Starting with title track, “Bold Like A Lion” Linsey displayed that raw soulful voice that many have come to love. This fearless songstress proves she has no fear as she mentioned later this is her 13th year in Music City and continues to push boundaries to pursue her dream.

The session continued as Linsey performed “Lover“, “Hearts Against The Wall” and “Say It To My Face“. Say It To My Face, a duet written with Aloe Blacc is a tongue and cheek approach to addressing all the internet trolls. After Linsey performed a few of her latest, everyone turned to the screen to get a preview of the “Mr. Homewrecker” music video. The song, Linsey, revealed was inspired while a roommate of hers was dealing with a divorce after her husband cheated on her with a stripper. The music video is sure to strike a chord with viewers through the lyrics and display of emotion and heartbreak. 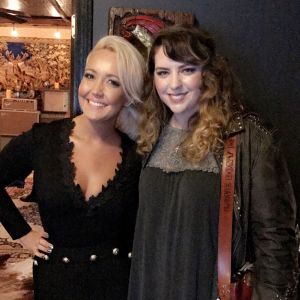 After the release party ended I got to have a few words with Linsey, the strong woman who has spent over a decade chasing down her dream in Nashville, continues to inspire to stay strong and never give up. In a world full of so much darkness, Meghan hopes anyone who listens to the CD walks away with a message of power and boldness.